skip to main | skip to sidebar

Welcome to my blog!

Thanks for popping in. This blog will cover lots of crafty tips, tricks, ideas, projects, experiments and giveaways... among other things.
Enjoy your visit and 'follow me'.
That way, you can visit again real soon!

Here are some of my favorite sites:

Out of commission - again! And a giveaway!!! Read on..

I've been out of commission since October 9th when *another* of the neighbor's trees hit our property (strange given we all trimmed before 'cane season). This time is was lightening that hit the upper part of the tree, instead of interior decay like the last tree. The decayed tree that hit the house in 2008 required a complete demo of the back of the house and a full rebuild. After a year of fighting with the insurance company, finding a contractor and the build itself, we ended up with a much nicer addition. This tree took out my shed, planting table, and yanked the phone and electrical lines off the house - initially. After the electrician replaced my weather head and repaired their end of things, FPL hooked us up.

Well... that's when things went from mild damage to YIKES! A flash fire started behind the electrical panel, ripped across the water heater wires, started to ignite the garage ceiling. I was in the garage with FPL guy! Let me tell you there is NO feeling - in the world - like watching your house start to catch fire!!! By the grace of god, the fire put itself out at the edge of the ceiling insulation. God is the only one that could have stopped it so quickly. There is a *suspicion* that what caused the fire is that FPL's meter box was full of rain water when the guy put it on the outside of the house, but we can't confirm that.

So... we were out of power for 6 days, and without phone or internet for 11 days. The estimated 30,000 volts of power that went through the house (a surge so strong the built-in breaker shut offs never engaged) killed my 2 yr. old washer, fried my fish tank pump, impaired a few cycles on the 2 yr. old dryer, and my electrician is suggesting the insurance company get us a new water heater given we can't assess what interior damage may be present from the surge. We are still in clean up mode with the tree/debris/charred ceiling - mess. And the fight with the insurance company has just began (please say a few prayers that the claim is settled much sooner than the last claim). This whole thing translates into zero clay time and I won't have time to finish my WIPs for Halloween. Boo.


But here's some good news for you: a Halloween Ornament Giveaway from artist Sylvia Smiser! 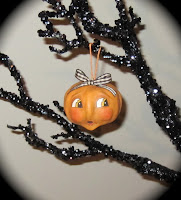 
Good luck to each of you.

Have a wonderfully creative day!

Recycle Artist
Florida, United States
I dabble in tons of mediums - recycling everything I can get my crafty hands on. I spend a lot of time at thrift stores, garage sales and gathering finds from other second hand sources. The messier the art, the happier I am! I am very tactile and like to work with textured art, as opposed to one dimension, like painting. Part of the appeal of tactile mediums is that I was born legally blind and I hope to develop my skills enough to be able to create with my eyes closed. That way, as my eyesight decreases, which is "a natural part of aging" according to my eye doctor, I'll still be able to function artistically. I'm not being pessimistic by saying that, rather I'm being realistic - a personality trait I have. I enjoy the process of exploring different mediums, even making mistakes along the way is a good thing. I'm a free spirit when it comes to my projects. I don't draw things our or plan very much. I start with a vague idea, jump in with both hands and see what happens. If it turns out, cool. If not, there's sure to be a lesson learned along the way. I'd love to have you follow me, so that we can learn together! And now, I'm off to create... something!