skip to main | skip to sidebar

Welcome to my blog!

Thanks for popping in. This blog will cover lots of crafty tips, tricks, ideas, projects, experiments and giveaways... among other things.
Enjoy your visit and 'follow me'.
That way, you can visit again real soon!

Here are some of my favorite sites:

My art is much improved!!!

That's right, my skills have much improved if I do say so myself.

I'm not to the point where I'm going to win awards anytime soon, but I'm gaining insight and the act of practicing - almost daily - is leading to many new ideas and better sculpts.

Being the eternal optimist that I am, I hope to get good enough to be featured in Art Doll Quarterly (ADQ). That is, once I get good enough and figure out how to write a query letter, intro letter and take photos in x size etc. Hey, a girl can dream, can't she?

Here are some of my latest pieces, I hope you enjoy them. 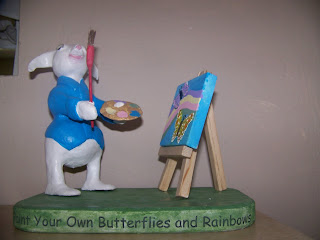 I love this one! Do you? 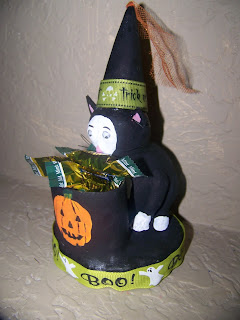 Sporty Chick; she'll be shipped to Texas soon as part of a Pay it forward art project I'm part of. She's also going to a childhood friend, Laurie, who I re-friended via FB. I sure hope Laurie likes her! 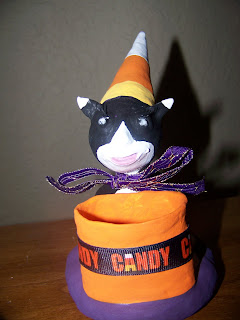 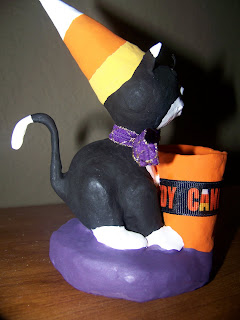 This is my 2nd kitty cat. Her candy cup only holds a few piece of candy but she's super sweet.

Psst. top secret: her base is a recycled empty ribbon spool. 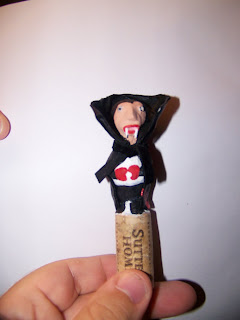 Vampee Bordaux is my first vampire ever. He'll be shipped to Canada soon, as he's going to one of my 5 Pay it forward FB friends.

Drats! All my really good update photos are on the other computer. I'll try to add them later.

Thanks for stopping by. Follow me to see what I'm doing next... I certainly have no idea what it will be. LOL

I'm off to create... something!

A Chef for my kitchen

My kitchen accessories (hot pads, place mats etc) are chef themed. While shopping I stumble upon a variety of Chef Themed items, but I'm usually not 'in love' with them, so I don't buy very many.
That means I'll have an idea recurring for weeks or months - a semi-flushed out idea, but not fully figured out. Then one day I'll try to make my own item(s)! Today is the day! I started my first chef. I have great hopes that he'll turn out well.
Lately I've been a huge fan of Creative Paperclay and the rest of my clay stash (Celluclay, polymer clay and other types of paper mache'/clay) have been pushed aside for some time. I decided to drag out the Celluclay, a 'failed' face (one I made from polymer clay long ago), and use up some armature worthy pieces that are taking up a lot of space.
Photo 1 is my starting point: A coffee can for the body, industrial paper towel rolls (a friend got them from the factory he works at - with permission, of course), the old face, and a batch of Celluclay. I haven't figured out what I'll be using for the arms, but it'll come to me as I move along. 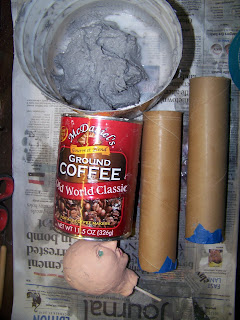 Photo 1 Notice the Legs (towel rolls) are slightly longer than the coffee can. That means I should have a pretty well portioned body once it's done (ignore the blue tape). 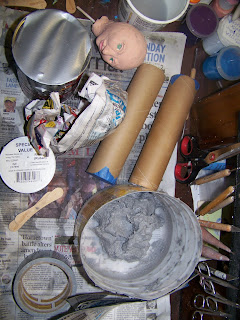 Photo 2 Duct taped open end of can. Wad of paper will be duct taped to ribbon spool for the hat. Popsicle sticks are shims.
I covered the open end of the coffee can with duct tape. Then I used popsicle sticks (thoroughly cleaned and dried) to 'shim' the middle of the taped area to meet the medal edges of the can. This end will need to be flush once I'm ready to attach the legs. The use of shims reduces the amount of clay I'll need to use. Then I taped the popsicle sticks in place. Next, I covered the entire coffee can with a layer of paper and let it dry. Next, I began covering the taped end with Celluclay and proceeded covering the sides with clay as well. Once I was halfway up the side, I flipped the piece over unto a paper plate. I continued to cover the coffee can's side and top.
I left a clay-free circle in the middle of the lid, a circle large enough for a toilet paper roll. I cut a toilet paper roll widthwise to shorten it. Then I measure the neck size I would need by cutting a toilet paper roll lengthwise, and putting it around the neck of my pre-made head. Once sized, I used duct tape to create a slightly smaller roll than the original size. I inserted the toilet paper roll into the clay free circle and continued to clay up to and around the paper roll.
Onto legs, feet and his hat. The legs were pretty much done given the strength of industrial towel rolls are many times thicker than household towel rolls. I folded up many layers of newspaper to create a rectangular shape the size of his foot. I duct taped around it to hold the paper in place. Then I folded up two corner of each rectangle to create rounded toes and duct taped them in place. Next I duct taped the rectangular mass of paper to the paper towel rolls. Finally, I added Celluclay and roughly shaped the feet. 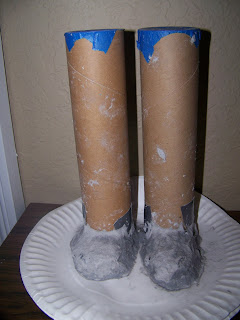 His hat was made from a repurposed, plastic ribbon roll with one end removed. It fit his head perfectly! I used newspaper again to bulk up the shape of his hat, duct taped it in place and added Celluclay for the initial shape of his hat. 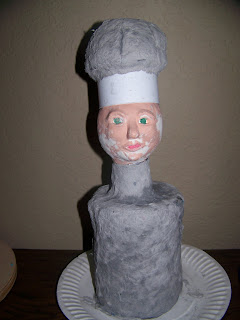 7/25/2011 Update: After the parts of his body were allowed to dry, I duct taped them together and covered them with more Celluclay. The Celluclay wasn't as smooth a texture as I would like so I did a 'smear coat' with ArtMind Clay Mache (please refer to 7/25/2011 product review blog for more details). The texture of his hat is what I got with Celluclay and the texture of his body is what I got after using a smoothing coat of ArtMind Clay Mache. 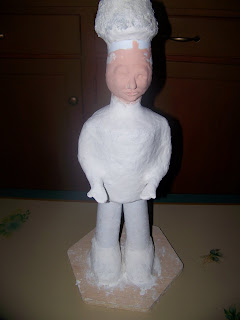 I'll add another update as he nears completion.
Thanks for visiting my blog! I'm off to recycle and create!
Update: March 11, 2012.
Yep, he's been stranded for months! I had some problems figuring out how to do certain things, like shaping his hat. I used folder newspaper to create the creases in his hat, along with the band. And I reworked his face with Creative Paperclay. He was sealed with a water based primer, and painted. Then I added scraps of fabric and ribbon for his scarf, waist trim, sleeve and pant trim. He's been sealed with several coats of matte finish, so that he can be cleaned with a damp cloth and enjoyed for years to come.
He's FINALLY done!!! And I really really like him overall! He's holding a spoon right now but he can also hold a small bucket on each which could hold sugar and sugar substitute packs. He could also hold a rod which could hold hot pads and a towel on each end. So there are many options for his usefulness. 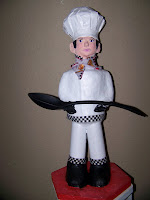 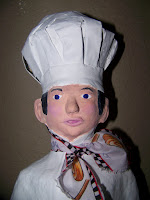 Here are some photos of my kitchen accessories. I think it all works pretty well together.
What do you think of him? I'd love some feedback, both good and bad. 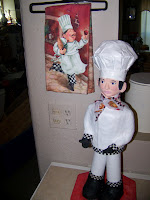 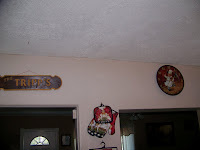 The name sign above the doorway has been in my other half's family for years and years. 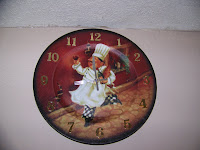 I found this clock at a thrift store last week for $6! 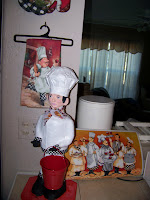 With one of his buckets to hold sugar packs.
Thanks for stopping by!
I'm off to recycle and create! Have a creative day!
Posted by Recycle Artist at Sunday, May 01, 2011 No comments:

Recycle Artist
Florida, United States
I dabble in tons of mediums - recycling everything I can get my crafty hands on. I spend a lot of time at thrift stores, garage sales and gathering finds from other second hand sources. The messier the art, the happier I am! I am very tactile and like to work with textured art, as opposed to one dimension, like painting. Part of the appeal of tactile mediums is that I was born legally blind and I hope to develop my skills enough to be able to create with my eyes closed. That way, as my eyesight decreases, which is "a natural part of aging" according to my eye doctor, I'll still be able to function artistically. I'm not being pessimistic by saying that, rather I'm being realistic - a personality trait I have. I enjoy the process of exploring different mediums, even making mistakes along the way is a good thing. I'm a free spirit when it comes to my projects. I don't draw things our or plan very much. I start with a vague idea, jump in with both hands and see what happens. If it turns out, cool. If not, there's sure to be a lesson learned along the way. I'd love to have you follow me, so that we can learn together! And now, I'm off to create... something!